Sound on GNU/Linux never have been convenient. Right now, de facto standard is PulseAudio: yeah, made by the same people that does this nightmare of systemd. When it works it is better than just ALSA  (Advanced Linux Sound Architecture). When it doesn’t, you’re in for a headache.

Anyway, I had this situation where I wanted user whatever to be able to use the soundcard. But the soundcard was blocked and reserved by PulseAudio started by my regular user account.

First option is to make PulseAudio work as a system daemon. UNIX-style option. Quite obviously, that would be too easy to implement for these systemd people. So they implemented the option altogether advising not to use it. I did not care about the advice, though, so I tried. And then I understood why, while advising not to use it, they said they would not be accountable for problems using it. Because it is utter trash, unreliable, giving out error endless messages and, in the end, not working at all.

So the system mode is a no-go, in the short run and definitely not in the long run either.

Alternate option is to open PulseAudio through the loopback network device. To do so, in /etc/pulse/default.pa add the TCP module with 127.0.0.1:

Obviously, by default tcpwrapper will refuse access, so you have also to add the relevant counterpart in /etc/hosts.allow :

From now on, after restarting PulseAudio, you should be able to access it through any user (in audio group).

Update: some comments on reddit made me think there has been a misunderstanding on the scope of this post. It is not to describe inner workings of audio on common GNU/Linux systems with PulseAudio. The following does and almost perfectly explain why I did not bother get specific on the topic : 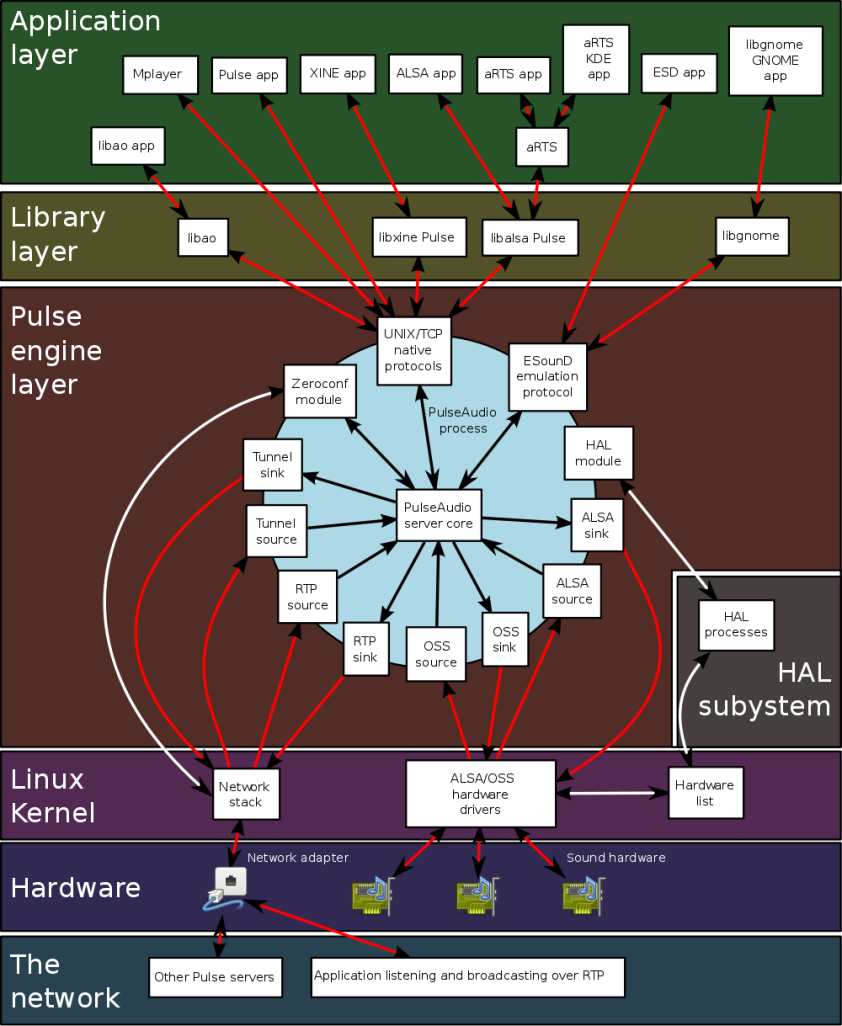 Ever found yourself in the situation where you have some kind of home cinema connected to your mainboard soundcard and headphones connected through their specific USB soundcard? It gets tremendously painy to handle if you regularly want to switch from the home cinema to the headphones without really unswitching anything.

I wrote a very basic script that, from two active soundcards, it keeps only one active and switch from one to another each time it is called. Note the script will not handle more than two cards. If you have more, you’ll have to hardcode them with the hash $cards_to_ignore.

Obviously, you can easily add keyboard shorcuts adding a new entry with kmenuedit.