I tend to try to avoid paper printouts. I have enough backups so scanned archives are enough. I made a few test on the best way to produce small PDF on the command line. I found the following bash functions to be the most effective:

It does all the work in ~/tmp/scan but that’s a personal convenience. With this, I get PDF that are smaller than 1MB – while other methods I tried before was producing 5/6MB files for the same content.

Update: now this is provided as general bashrc.d script. It’s included in the -utils package. Now the main command for multiple A4 pages PDF is no longer scan2pdfs but scan2pdf. Its behavior can be changed through variables SCAN2PDF_DIRECTORY (default = ~/tmprm/scan) and SCAN2PDF_DPI (default = 300).

In my article Setting up a silent/low energy consumption home server (DHCP/DNS/SMB/UPnP) are featured two perl script to provide a web interface to reset Samba password and to monitor (allow or ban) connections on a wifi (hostapd).

It’s not sophisticated and I have no plans to make it so. It fits a simple purpose.

I added to my list of Debian -utils package so if you happen to use it, you should proceed as follow.

First, note somewhere the www-data MySQL password. You probably  don’t remember it. It was hardcoded. Get it typing:

Then update the package. Assuming you already got the -keyring package:

Make sure this file is readable to and only to www-data:

It should be working. You need to cleanup outdated files (that have been renamed since then):

That’s all I can think of.

If you are not doing an upgrade but an install, the package -utils-nginx provide /etc/nginx/sites-available/fcgi as sample in order to set up Perl FastCGI.

I’m using a laptop, among other things, as alarm clock (included in my -utils general debian package). The hard disk of this laptop is not getting any younger and get noisy while there’s a decent amount of RAM available.

I toyed a bit in the past with ramdisk/tmpfs (the later having the benefit not to used a real fixed size but to adjust and unused memory free) and made tests to use tmpfs for /var/log. Since then, I did not use much this so-called transient log: it cannot be seriously used on a server where you want your logs not tampered with in any way – and especially there in case of failure; it does not make laptop or workstation very silent since there is still a large amount of file access that is in ~/.

In the case of my laptop part alarm clock, many ~/.directories and ~/.files are regularly read or wrote. So I finally changed the initial transient log init script into /etc/init.d/shush-toram that reads /etc/default/shush-toram to determines which directories to put into tmpfs, for instance /var/log and /home/alarmclockuser. bviously, you don’t want to put on tmpfs in directory that would use all or more of your actual RAM. There is also a /etc/cron.daily/shush-toram job that’ll daily update the data on the hard disk (just calling the init script with reload or restart).

Once the scripts in place, you just have to do:

Yeah, that’s sysv init scripts. It’s probably not necessary that I discuss the merits of systemd. I tried it and was happy to boot faster than usual. Then I found that making init scripts with it was annoying, counterproductive for me. Then I found that my /var/log directory contained a subdirectory journal of more than 800 Mo – that can be fixed by editing some conffile obviously, but it’s not working clean out of the box. It just does not suits me. It could, and will surely, improve. Still, it’s being made mandatory here and there while it’s still counterproductive and unpolished. I’ll continue to make script for sysv -that can actually be started outside of sysv- since I’m likely to try to avoid systemd as much as possible.

The shush-toram files are included in my -utils general debian package.

Richard Matthew Stallman is a prolific writter and thinker. Mails he send these days start with:

[[[ To any NSA and FBI agents reading my email: please consider ]]]
[[[ whether defending the US Constitution against all enemies, ]]]
[[[ foreign or domestic, requires you to follow Snowden’s example. ]]]

Freedom matter a lot of him. So that makes sense.

I’d like people to understand that we are not still considering the question. It is a final decision to do this.

I will give a brief explanation. We cannot continue doing that because we have no one to maintain it properly.
This is maintained seriously. Therefore we will switch to This.

That was something he was never involved with, into he never spent a dime or a second. But as it relates to GNU, he thought he had the right not only to state his mind but to override any other opinion and ultimately decide. Because he thinks he’s right and know better, he thinks he can just have private talks with some parties and decides on his own. Well, This that he promoted turned into a proprietary software a few years later: he definitely should have know even better.

More than 12 years later, he’s still the same when he writes:

For now, please do NOT install this change.

I will talk with ThisDude about this, off the list, to find out more about the situation.

So although he values his freedom and values freedom in general, working with him, even in a very distant way, is just a matter of subordination. He’d make a credible science-fiction character: distopian guru, the Pied Piper of MIT. 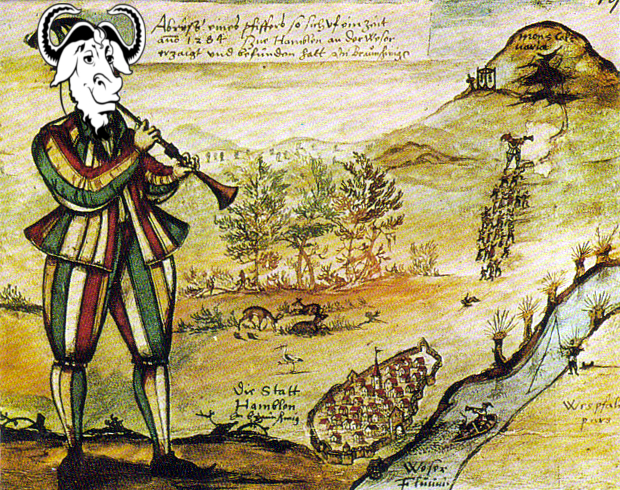